On Sunday, June 12, 2022, Bob Mitchell, OFS (Bob is on the far left in the picture below) was called to be Minister of St. Juliana Secular Franciscan fraternity along with four new council members to serve for 3 years as servant leaders guiding the on-going formation of the members of the fraternity in accordance with the Rule of the Secular Franciscan Order. 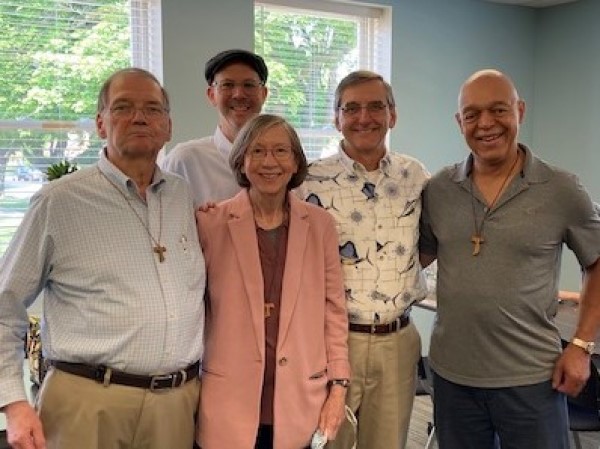 Please keep the council and Bob in your prayers that they will be open to the inspiration of St. Francis and St. Clare and the guidance of the Holy Spirit as they undertake our responsibilities within the Mother Cabrini Region.

For more information about the order or if you wish to explore being a Secular Franciscan, please email Bob at robertpmitchell1@gmail.com.

This link has a lot of great information too: https://ilofs.org/about-us/who-we-are/. An excerpt: “The Secular Franciscan Order (Ordo Franciscanus Saecularis, OFS), formerly known as the Third Order of St. Francis, is an official Order within the Catholic Church and was established by St. Francis of Assisi in 1221 for lay men and women wanting to follow his way of life. At first, he wrote a simple Rule for the Third Order, then later a more formally-worded Rule in 1221, which was approved by Pope Honorius III. Today’s Secular Franciscans follow the Rule approved by Pope Paul VI in 1978.

Unlike religious brothers and sisters, those in secular orders (also known as third, tertiary, or lay orders) don’t remove themselves from the world but remain in it; hence the term ‘secular.’ Married or single Catholic women and men from all walks of life are able to join these orders, as are diocesan priests and deacons.”