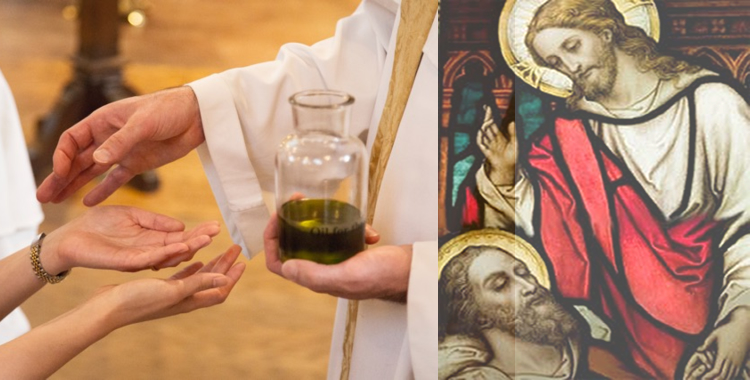 The United States Conference of Catholic Bishops tells us that through the ministry of the priest, Jesus heals the sick from sin, and possibly from their sickness. We do not have to wait until we are near death to receive the sacrament; we need to make a careful judgment about the serious nature of the illness. When a person is anointed, it is hoped that if it is God’s will, they will be physically healed from the sickness, but if there is not physical healing, there will be spiritual healing. In the Sacrament of the Sick, the person receives peace and courage to deal with the difficulties of the illness.

Please call the parish office at 708-453-2555 if you need an individual Anointing of the Sick by a priest.

The actual anointing takes place after the homily of the Mass, when the priests goes to each person to be anointed, first laying hands on the person’s head (asking the Holy Spirit to come down upon those who are sick, and to strengthen them); and then anointing them on the forehead and on the hands, saying, “Through this holy anointing, may the Lord in His love and mercy help you with the grace of the Holy Spirit.” The sick person responds, “Amen.” “May the Lord who frees you from sin, save you and raise you up.” The response: “Amen.”

Who can be anointed?

Anointing of the Sick