St. Mother Theodore Guerin Parish is proud of the different Religious Art Objects and Stained Glass Windows in our two different churches that help enhance our liturgical environment and bring us together in worship as a community. 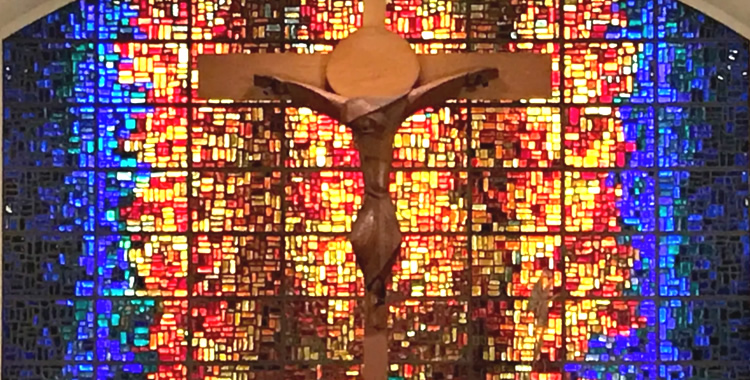 The great mahogany crucifix was conceived and begun by Sister M. Thomasita, OSF, in 1947, shortly after her graduation from the School of the Art Institute of Chicago. Soon her duties as chair of the Fine Arts Department and director of the Studio San Damiano at Cardinal Stritch College in Milwaukee prevented her finishing the great sculpture. In 1961, on the commission of St. Cyprian Parish, she completed the Crucifix as she had originally planned it: the figure of Christ, measuring two by eight feet, is sculpted in block mahogany and attached to fifteen by eighteen foot mahogany beams; the mahogany halo is two and a half feet in diameter. Sister Thomasita gained fame as a painter and teacher of art, but she considered the great Crucifix her masterpiece in sculpture. She created over 600 works in her career which are now in galleries, churches, and museums around the world.

Information is from the Golden Jubilee Book of St. Cyprian published in 1977.

Seeking a suitable backdrop for the great crucifix, Father Richard Douaire envisioned a wall of slab glass, a great burst of light symbolic of the Resurrection; thus the whole Paschal Mystery of Christ passing through death to life would be made artistically alive for us. Raymond Toloczko (1925-1972), then a young graduate of the Chicago Art Institute, later a well-known painter prior to his untimely death; was commissioned to live at St. Cyprian and produce the “cartoons” – full-size drawings from which the windows would be built. The 6,800 segments of glass in 23 colors, imported from Chartres, the famous home of French medieval glass, were each cut and faceted by hand by Father Douaire himself. The engineering and structural problems of the pouring, the curing of the epoxy binder, and the installation of the finished panels were solved by our talented Chief Engineer, George Vondran, aided by Joseph Vida. Their technical advances in this phase of production of slab glass and epoxy windows have been copied by many commercial houses engaged in this work. 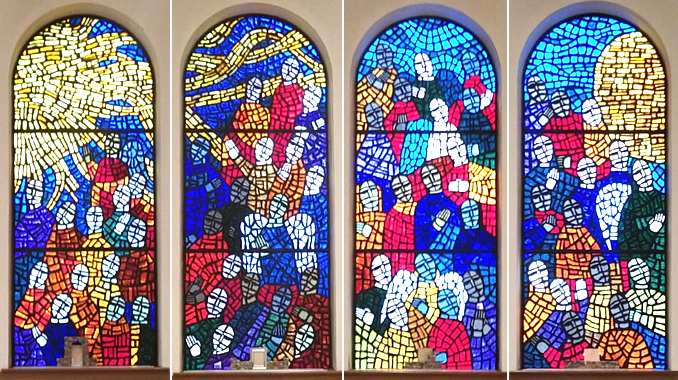 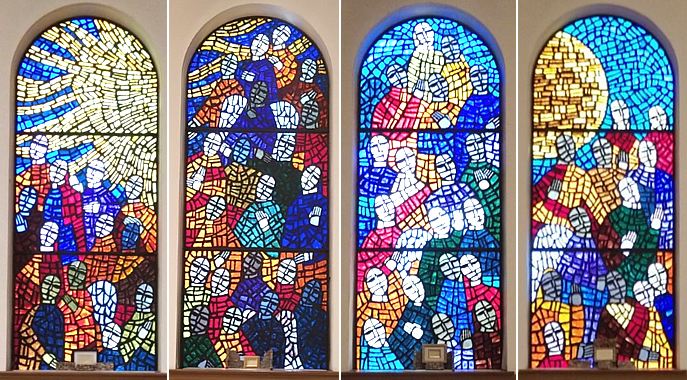 Raymond Toloczko designed, and Father Douaire and George Vondran and Joseph Vida built the two stories of side windows, each representing a procession of the People of God to the altar and to the Heavenly Jerusalem. Sixty–eight colors of glass were incorporated in these windows. On the south, a day scene is illuminated by the sun’s rays; on the north, a scene by night shines under the light of the moon. Their final joint projects were the lovely small window of Mother and Child found in the rear of the Church, and the charming Chrysanthemum Window in the west wall of the Church balcony.

Information is from the Golden Jubilee Book of St. Cyprian published in 1977.

The St. Celestine Church stained glass windows were designed by Gabriel Loire (1904-1996), a French stained glass master who started the Loire Studio in Chartres, France, which is now run by his descendants. His work appears in many churches around the world. He was a pioneer in the use of dalle de verre, which is a method of making thick slab glass that is much stronger than the type of stained glass made in the Middle Ages. Loire had studied stained glass at Catholic University of the West in Angers, France. He worked for Charles Lorin in Chartres, and when he left that studio had to agree to a non-compete clause where he was not allowed to make stained glass for 10 years. During that time he studied painting, illustrating, and writing and at the end of 10 years returned to making stained glass and started his own studio.

Gabriel Loire explains the meaning of the stained glass at St. Celestine.

The windows of the church describe to the visitors the evolution of a blue tapestry, woven with gold and mother of pearl threads and which tends to draw the attention of the visitor to the altar. This effect gives the whole church a mystic light, creating an atmosphere of silence.

The path of light, to the right and to the left, follows the church architecture and accompanies in the parallel way, the faithful advancing toward the altar. The nave stretches out between these two long luminous bands of light, heading towards the chancel window, which like a tree reaches the top of the church. The light is channeled all along the architecture to explode on the top of the altar, but this light is also at the level of the faithful, thereby gathering mankind’s sorrows and joys, to melt and grow into the living Christ of the Resurrection.

Technically, the great originality of St. Celestine’s glass is due to the use of certain glass; the whites that are used edgewise and not flat wise, as is usually the case.

On the blue background, always uniform, the paths of light are always in relief. This is the overall look of the church. Now to each window.

Window No. 1 – The Sanctuary Window 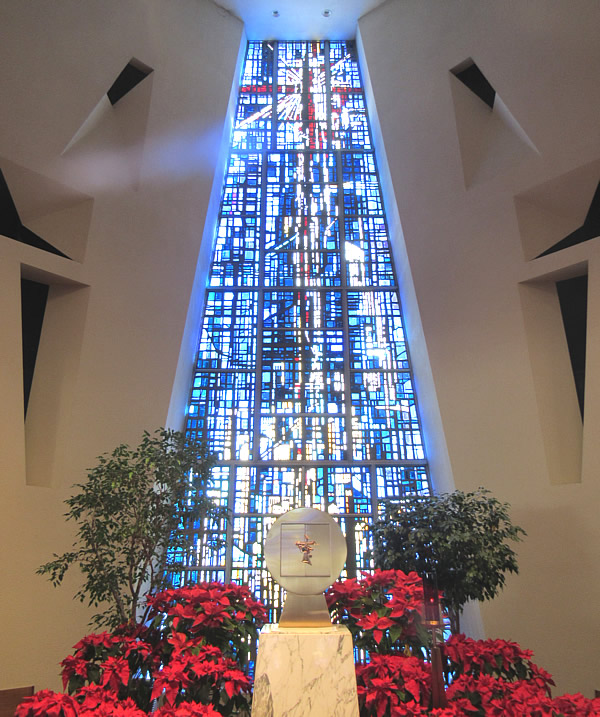 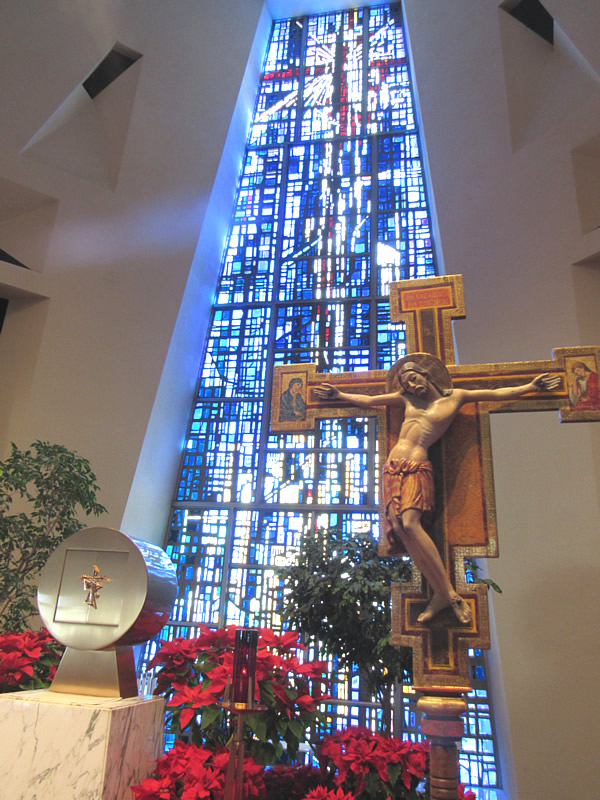 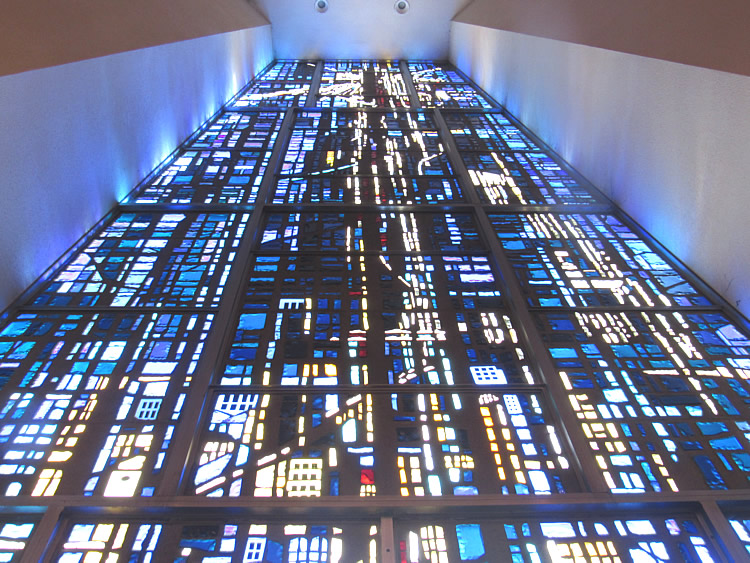 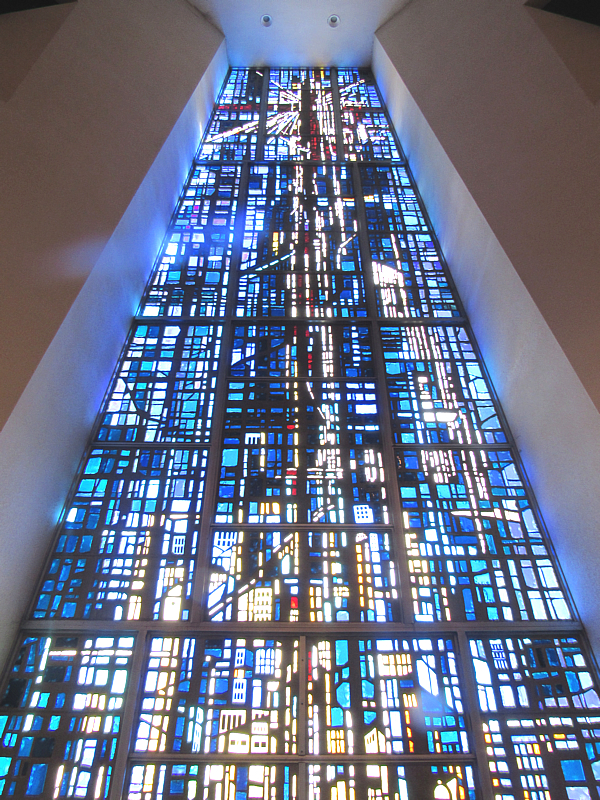 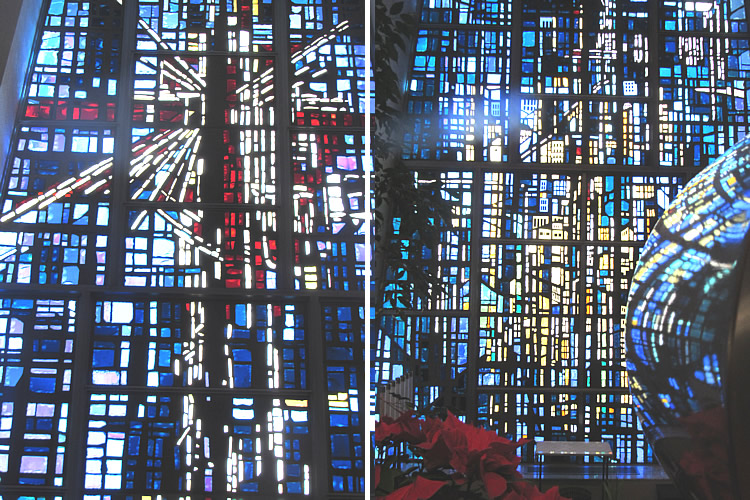 Represented in this masterpiece is the Redemption for the entire world, and in particular for the city. In this large window, rising above the chancel, there is all the history of the salvation of the world, the world symbolized at the lower par, by the city, uncountable, tumultuous, sparkling, as could be our metropolitan area, city, and suburbs. The mixture of many lines and irregularly drawn shapes enables one to see the people of different nations, different races, and even different religions swarming into “the city.” Plunged in the night of the cosmos, it comes out of the darkness to meet another light, brighter by far; that of the sun of justice and love.

As in the other stained glass, the blue light tapestry is a subtle texture, often tightly knotted, sometimes loose and rough, as in big stitched weaving. Brighter spots illuminate the blue of the night, more vigorous and beautiful lights entering near the center from silver slits. One can think of the cities, late in the evening, of homes where all gather around the lamp, even the complexities of human faces dim in the reflection of brighter lights. In this stained glass window, close to where the faithful gather their prayers and sacrifices, the lowest part has more colors and brightness and frames the tabernacle, the light as a glow in the night, rises as a desire and descends as a gift from the purple and diamond cross, which high above, embraces the whole world and transforms into a light and merciful star of clearness, what was heavy and dark. At the very top, the cross of Christ dominates all, radiating the world with purple and white light and crying with drops of blood, flowing to and for humanity.

Nave Window No. 2 Along Wellington Avenue 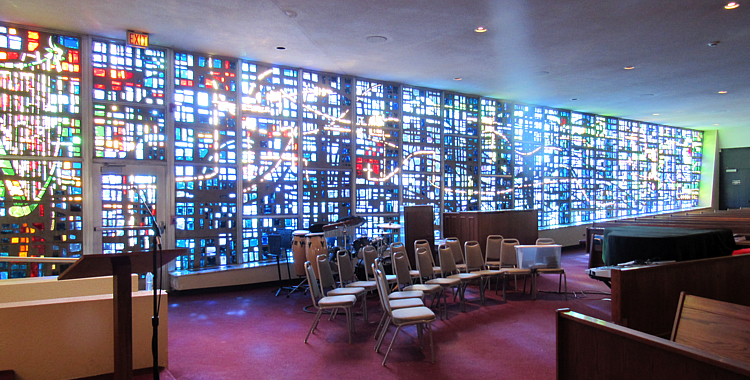 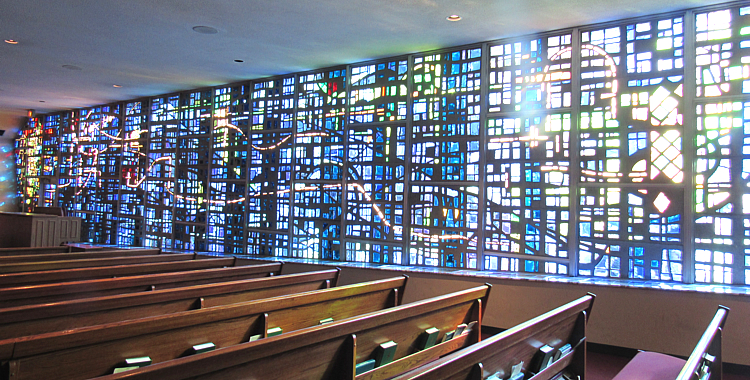 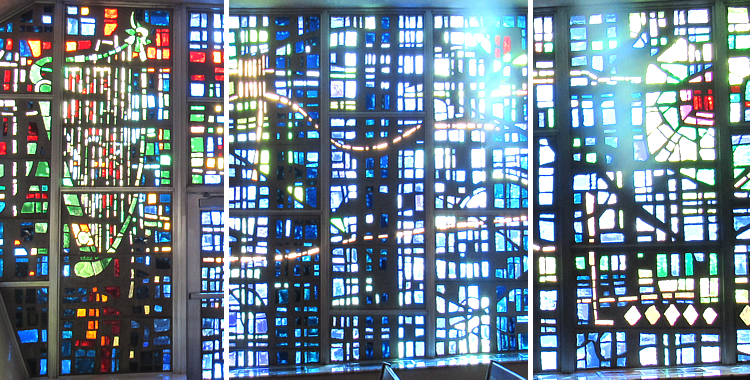 Lights and colors describe the road of humankind, a road very often dark, but crossed by the spirit, which springs out and sows joy wherever it goes, this being interpreted by the slits of white light in relief; blue lights and arches frame this road, for those who know how to catch sight of them in the haze of common everyday. Crosses come close to it, as they do in life, but golden lozenges offer the contrast of serene steps onside a humble Roman church with its perfect geometry. There is also offered the rest of green pastures, identified with a paradise of abundance and spring water. Dark and shadowy zones do not prevent the road of love to go on its way, its aim to reach the source of faith in the warm and red palpitations of God’s heart and his spent blood.

Nave Window No. 3 Along 76th Court 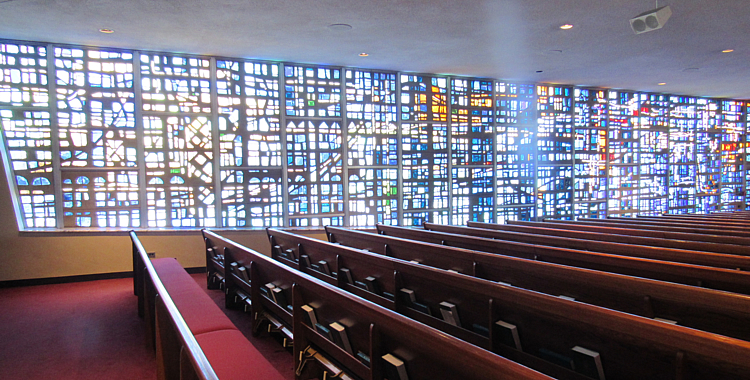 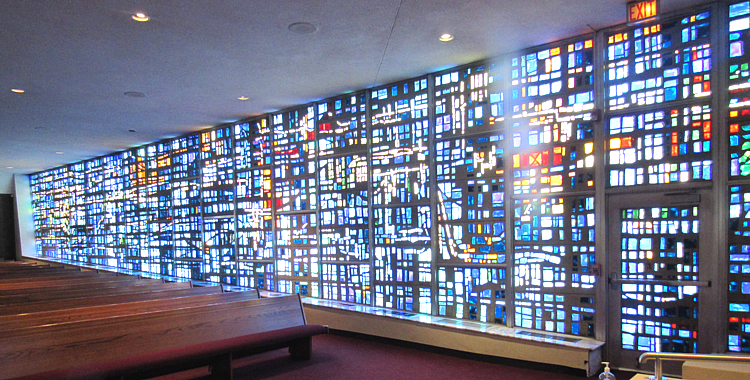 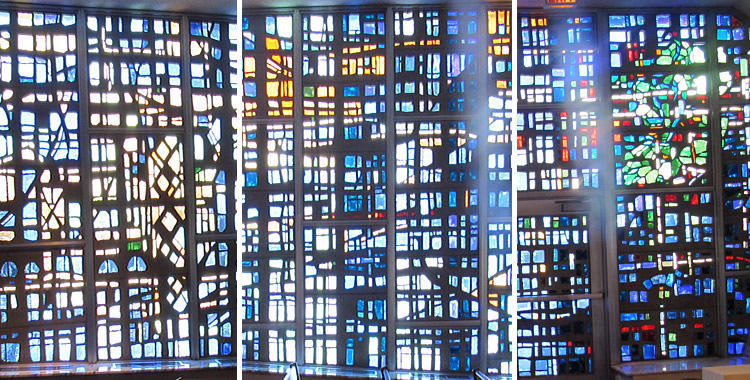 Once again people are led toward the altar where they will lay their anguish and their hopes. Welcoming in the morning’s light, this trail of spirit leads as lighting in the darkness, speaking of landscapes and cities. One can see on the left, a sort of Jerusalem with rivers, steep mountains almost insurmountable, a crowd of all races and colors going through painful trials of blood and tears, but still marching toward a royal entrance where they will be welcomed and nourished forever. This stained glass window is lighter because we go from light as we enter to the deeper meaning of spirit as we reach the altar area. The greenery of Ireland, matching the harp of the other nave window, represents Pope St. Celestine’s close affinity to that Isle in sending St. Patrick to Ireland.

Window No. 4 – The Baptistery 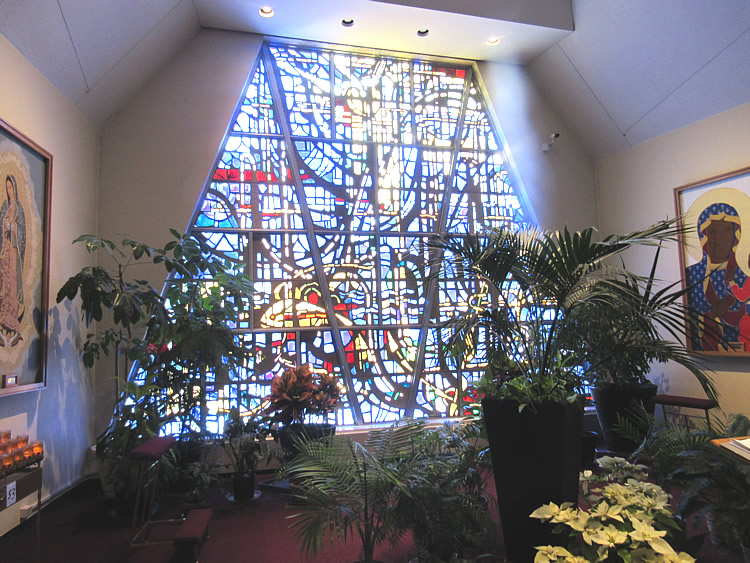 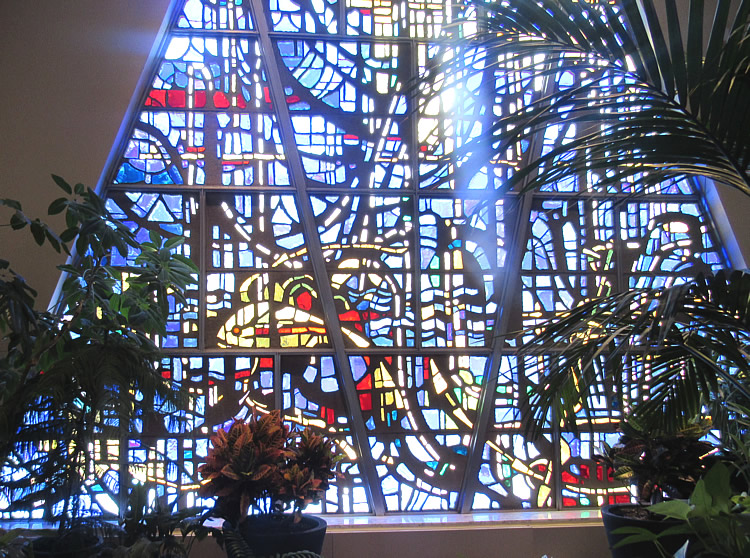 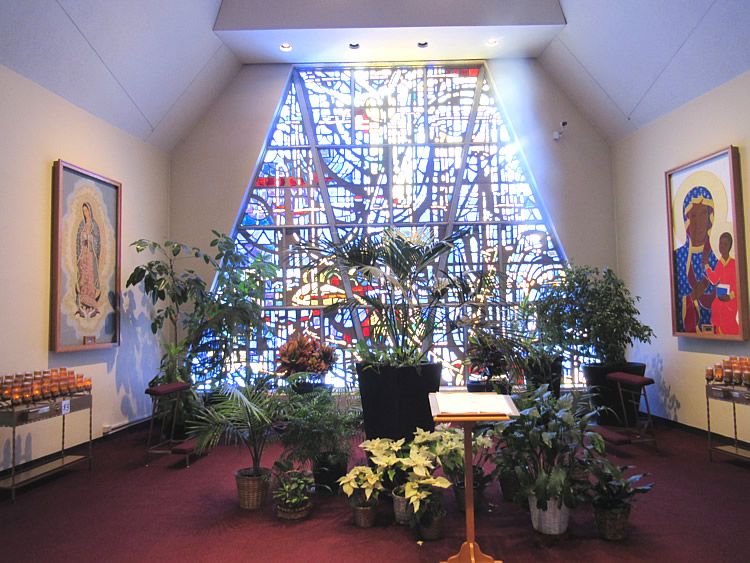 This window is most vibrant. The blues are lighter, more transparent, spotted with pale gold, and wavy like torrential waters. Baptism, being the sacrament of divine life, gives back to us, by washing away the stain of sin with purifying water. Water, bounds and gambols throughout the window like a game of eternal infancy. Three principal symbols stand out in gold filigree: that of the dove above which represents the Holy Spirit, hovering over the waters and giving it life; the fish to the left, the symbol of Christ (the Greek icthys); and to the right, the anchor of hope, the hope of the water of life, offered to sinners and to the thirsty.

Stations of the Cross at St. Cyprian Church

Information below taken from https://jeancharlot.org.

Station I – Christ before Pilate 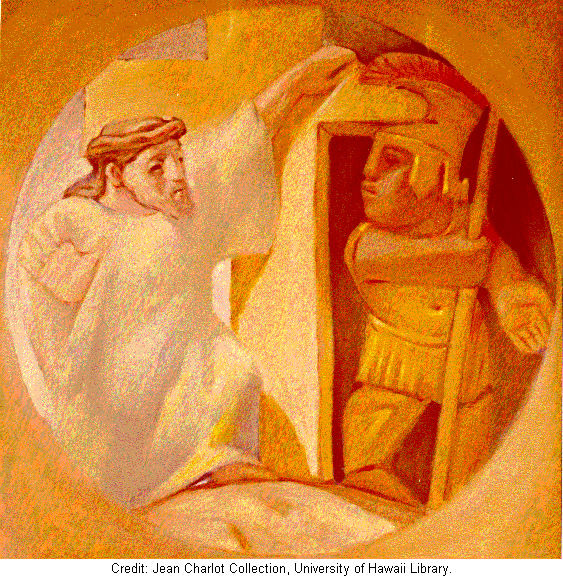 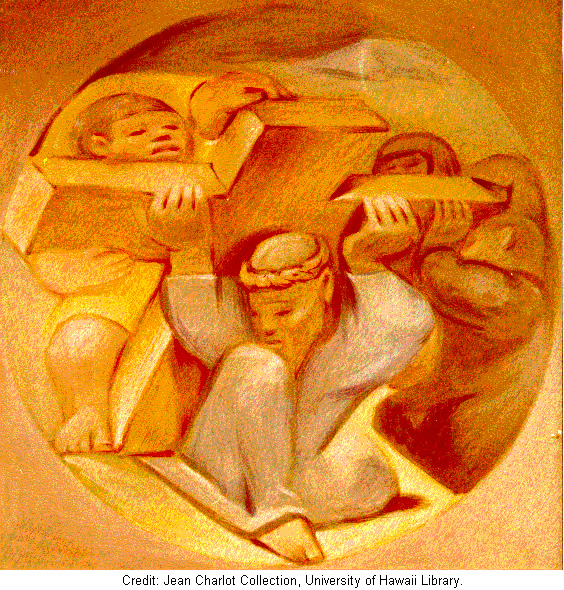 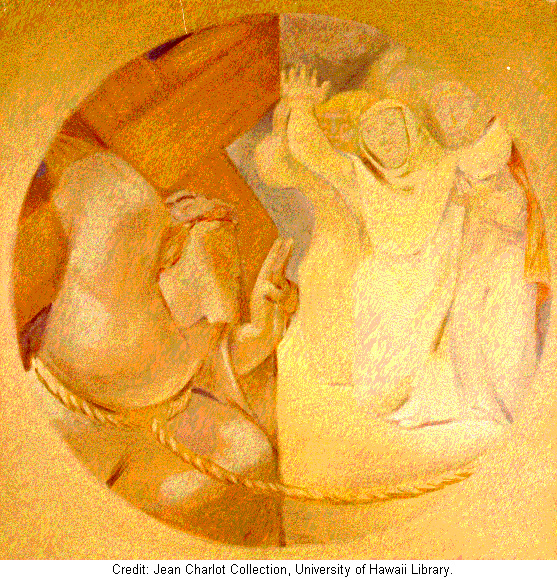 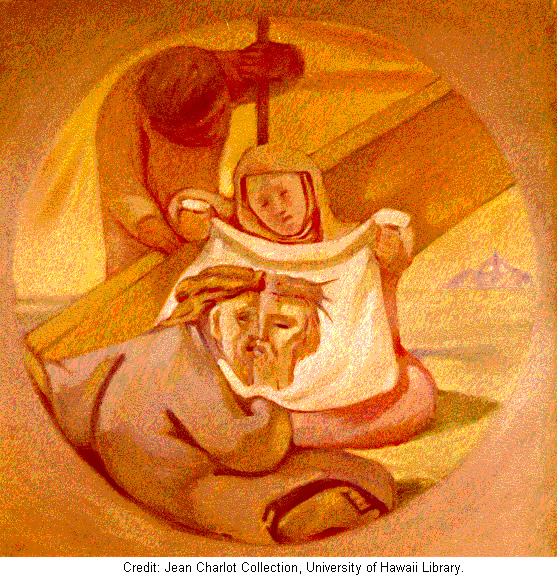 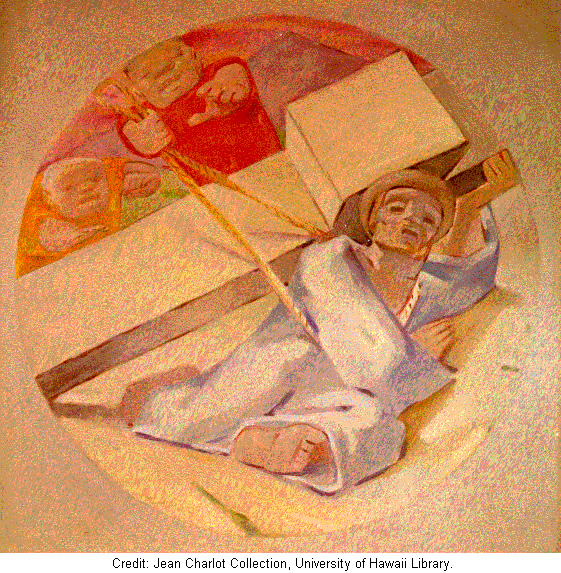 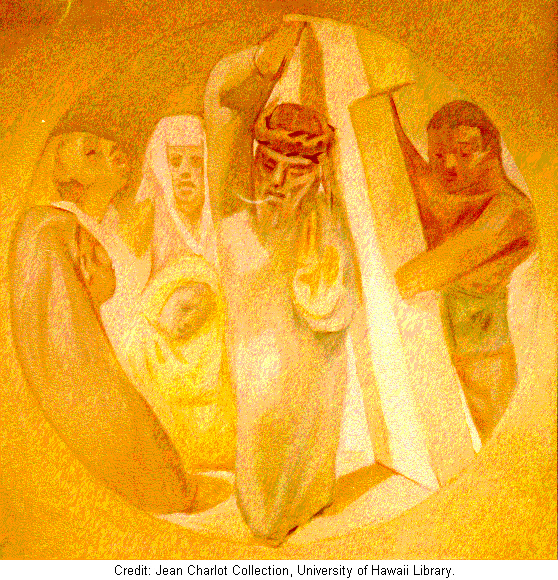 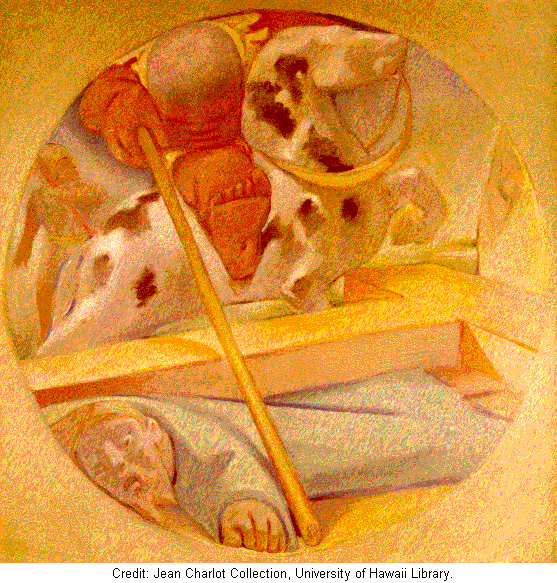 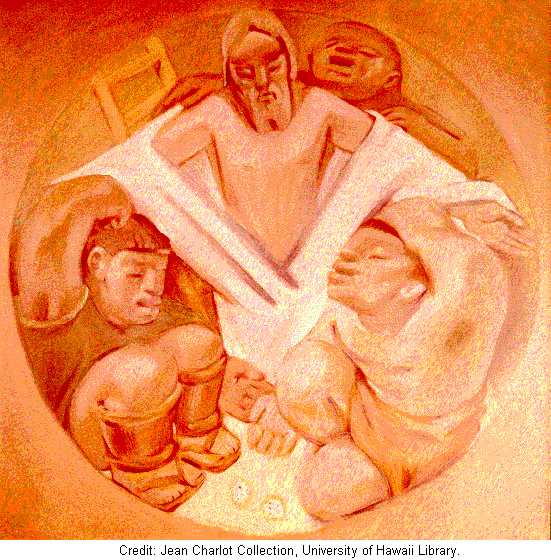 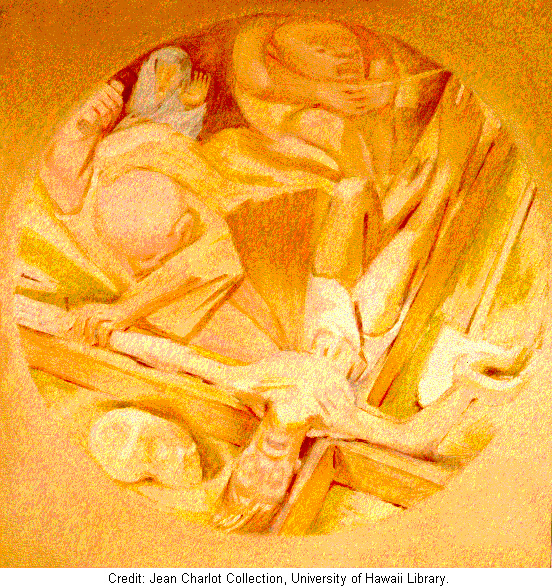 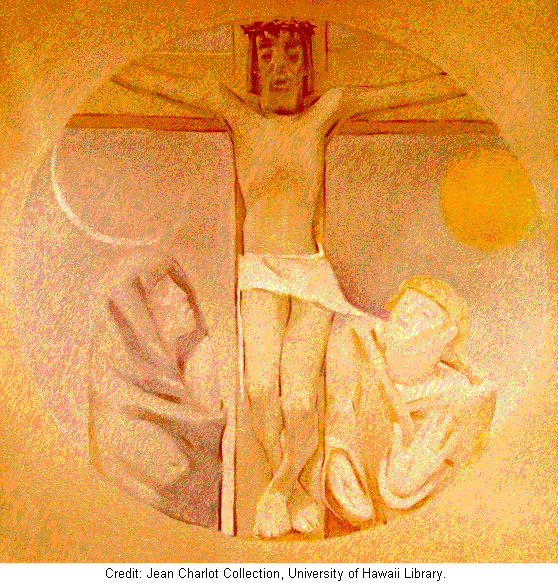 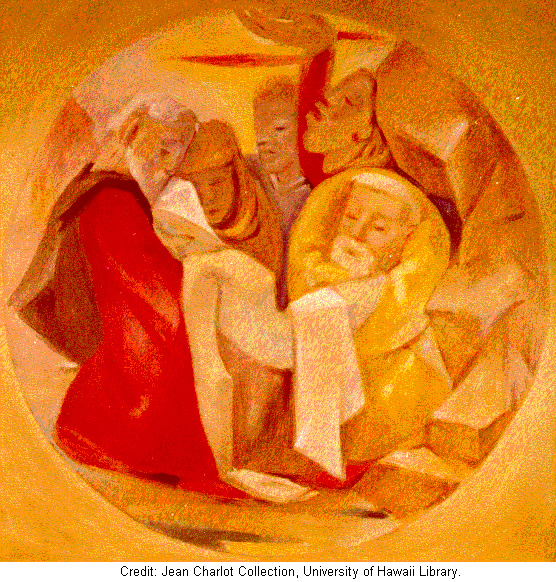